Esophageal cancer, which mainly occurs in patients aged from 50 to 80 years, is the 11th most common type of cancer in Korea, accounting for approximately 1.7% of all cancers. An estimated 1,600 new patients are diagnosed with esophageal cancer every year [1]. Treatment options for esophageal cancer are surgery, chemotherapy, or radiotherapy [2
-8]. Radiotherapy for inoperable or unresectable esophageal cancer plays a crucial role in achieving optimal tumor control along with reducing normal tissue complications. However, a planning target volume (PTV) is a long, tube-like structure that connects the throat and stomach, as shown in Fig. 1, which creates challenges when planning a treatment. As there are several organs at risk (OARs) in the vicinity of the esophageal cancer, which include the lungs, heart, liver, spinal cord, and stomach, incorrect treatment may cause serious side effects such as radiation pneumonitis and fibrosis in the lungs as well as pericardial effusion, pericarditis, and heart failure [9]. 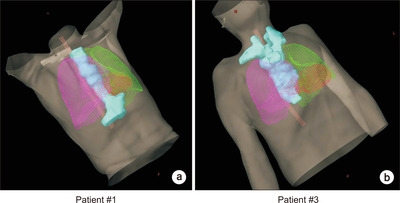 Twenty patients with esophageal cancer were retrospectively selected. All patients had been previously treated with radiotherapy at our institution. An approval for this study was obtained from the Institutional Review Board of the Veterans Health Service Medical Center (IRB No. 2020-07-011). For selected patients, the mean PTV was 388.3±163.8 cm3. The mean PTV craniocaudal extent was 19.4±3.2 cm, traversing critical normal organs such as lungs, heart, liver, spinal cord, and stomach. All patients underwent computed tomography (CT) scans using Brilliance CT Big BoreTM (Philips, Cleveland, OH, USA) with a slice thickness of 3.0 mm.

The dose-volumetric (DV) parameters were used to assess the dosimetric quality with respect to the PTV coverage and volume of OARs irradiated. For the PTVs, the evaluated DV parameters were the dose received by at least 98% of the PTV D98%, D95%, D5%, D2%, the absolute volume of the PTV irradiated by at least 105% of the prescription dose V105%, the minimum dose, the maximum dose, the mean dose, the conformity index (CI), and the homogeneity index (HI). The CI and HI are defined as follows [18-20]:

where the volume of reference isodose is the prescription dose.


The mean total monitor units (MUs) were compared for both the cVMAT and ncVMAT plans.

1. Total MU and DV parameters of the PTV 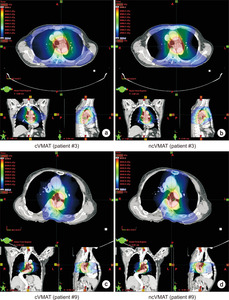 Fig. 3. For representative patient cases (patient #3 and #9), calculated dose distributions in the axial, coronal, and sagittal views of coplanar volumetric modulated arc therapy (cVMAT) plans (a) and noncoplanar VMAT (ncVMAT) plans (b) of patient #3, and cVMAT (c) and ncVMAT (d) of patient #9. 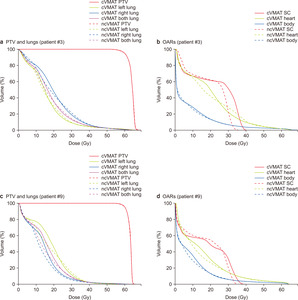 Fig. 4. For both coplanar volumetric modulated arc therapy (cVMAT) and noncoplanar VMAT (ncVMAT) plans, the dose-volume histograms (DVHs) of the planning target volume (PTV) and lungs of the patient #3 (a) and #9 (c) are shown. The DVHs of the other organs at risk (OARs) of the patient #3 (b) and #9 (d) are shown. The cVMAT and ncVMAT plans are plotted with the solid and dashed lines, respectively. SC, spinal cord.

2. DV parameters of the OARs

3. DV parameters of the whole body

In this study, we compared the potential dosimetric improvements of the ncVMAT plans with those of the cVMAT plans, for the long, tube-like PTV of esophageal cancer. The cVMAT plans with three coplanar full arc beams and the ncVMAT plans with two coplanar full arc beams and one noncoplanar partial beam were used for planning. For the noncoplanar beam, the couch rotation angles were adjusted to 315°±5° to avoid collision between the patient on the couch and the gantry. For dosimetric evaluation, the DV parameters of the PTV and OARs and total MUs for each VMAT plan were obtained.

To date, this is the first study that attempted to evaluate the dosimetric superiority of ncVMAT plans in patients with long, tube-like esophageal targets for a large group of patients (n=20). In a similar study, Li et al. [16] investigated the dose distributions around esophageal cancer and the surrounding OARs using coplanar IMRT and noncoplanar IMRT. They reported that the conformity and mean dose of the PTV were comparable between the coplanar IMRT and noncoplanar IMRT plans while the values of V5%, V10%, V20%, and the mean dose for lungs using the noncoplanar IMRT plans decreased by 16.3, 10.6, 5.8, and 248.7 cm3, respectively, compared to those for the coplanar IMRT plans. The results of the present study are consistent with those found in earlier studies. The ncVMAT plans reduce the doses to OARs such as the lungs, heart, and spinal cord, as shown in this study. We found that the maximum doses to both the spinal cord and heart were dramatically reduced in the ncVMAT plans. For representative patient cases (patients 4 and 7) in this study, when using the ncVMAT plans, the maximum dose differences of 6.4 and 3.0 Gy were observed in volumes in the spinal cord and heart, respectively. We also found that low doses to the lungs and liver were significantly reduced for the ncVMAT plans. However, the values of V105% of the PTV and V100% of the whole body were increased for the ncVMAT plans. Nevertheless, these findings show some potential benefit of using the ncVMAT plans.

Except for the spinal cord and heart, there were minor improvements in dose distribution from the ncVMAT plans over the cVMAT plans in this study. This is mainly because the noncoplanar arc beam used in this study was limited. When using large noncoplanar angles, the probability of collision between the patient and the gantry increased. Theoretically, the 4π technique could provide significant OAR sparing compared to both the cVMAT and ncVMAT plans and then allow substantial dose escalation to the PTV [22,23]. Woods et al. [22] demonstrated that the 4π technique reduced 50% of the prescription doses by ~23%, compared to both cVMAT and ncVMAT plans. However, this technique significantly increases both the treatment time and the probability of collision between the patient and the gantry. In the clinic, we need to determine the noncoplanar arc beam configuration for effective treatment that represents a compromise to account for the combination of the gantry rotation angle and the couch angle.

Noncoplanar techniques have been widely examined for spherical targets for brain tumor radiotherapy, lung stereotactic ablative radiotherapy (SABR), and liver SABR patients, showing dosimetric benefits to either the PTV or the OARs [9,22,24
-27]. However, there are few dosimetric studies for large, irregularly shaped PTVs such as head, neck, and esophageal cancer. Gayen et al. [28] compared the dosimetric plan quality of the ncVMAT and cVMAT plans for head and neck malignancy and then demonstrated that ncVMAT plans provide better PTV coverage and OAR sparing, compared to cVMAT plans. Nevertheless, treatment of large, irregularly shaped head, neck, and esophageal cancer with noncoplanar beams is challenging due to the complicated positional relationship between the PTVs and the surrounding OARs. Further studies to prove the superiority of ncVMAT plans over cVMAT plans according to the size and shape of the PTV will be performed in the future.

The use of ncVMAT plans with two coplanar full arc beams and one noncoplanar partial beam provides better PTV coverage and OARs sparing, compared to that of cVMAT plans with three full arc beams for long, tube-like esophageal cancer. Furthermore, this technique can be adopted in the clinic for large, irregularly shaped targets with caution.

Ethics Approval and Consent to Participate

The study was approved by the Institutional Review Board of the Veterans Health Service Medical Center (IRB No. 2020-07-011).

This study was supported by Basic Science Research Program through the National Research Foundation of Korea (NRF) funded by the Ministry of Education (NRF-2017R1D1A1B03036093) and by a VHS Medical Center Research Grant, Republic of Korea (grant number: VHSMC 20056).