Abstract
Purpose: T his s tudy a imed t o i nvestigate t he a ccuracy o f h ead s catter f actor ( Sc) by applying a developed multi-leaf collimator (MLC) scatter source model for an unflattened photon beam.
Methods: Sets of Sc values were measured for various jaw-defined square and rectangular fields and MLC-defined square fields for developing dual-source model (DSM) and MLC scatter model. A 6 MV unflattened photon beam has been used. Measurements were performed using a 0.125 cm3 cylindrical ionization chamber and a mini phantom. Then, the parameters of both models have been optimized, and Sc has been calculated. The DSM and MLC scatter models have been verified by comparing the calculated values to the three Sc set measurement values of the jaw-defined field and the two Sc set measurement values of MLC-defined fields used in the existing modeling, respectively.
Results: For jaw-defined fields, the calculated Sc using the DSM was consistent with the measured Sc value. This demonstrates that the DSM was properly optimized and modeled for the measured values. For the MLC-defined fields, the accuracy between the calculated and measured Sc values with the addition of the MLC scatter source appeared to be high, but the only use of the DSM resulted in a significantly bigger differences.
Conclusions: Both the DSM and MLC models could also be applied to an unflattened beam. When considering scattered radiation from the MLC by adding an MLC scatter source model, it showed a higher degree of agreement with the actual measured Sc value than when using only DSM in the same way as in previous studies.
Keywords : Head scatter factor, Unflattened photon beam, Multi-leaf collimator, Dual-source model

The head scatter factor (Sc) is the relative ratio of all scattered radiation amounts from the head of the linear accelerator (linac). According to the American Association of Physicists in Medicine (AAPM) Task Group (TG)-74 report, the main causes of scattered radiation include the primary collimator, flattening filter, jaw, and MLCs [6]. The AAPM TG-74 report has mentioned that scattered radiation by the MLC is no longer negligible as IMRT and VMAT use several small and irregular MLC fields [6]. This led to the increased importance of scattered radiation from the MLC, and research was needed accordingly. Nevertheless, previous studies have developed models that did not consider scattered radiation from MLCs; these models were dual- and three-source models in which Sc is calculated by measuring the area of the model using detector’s eye view (DEV) [7-9]. When the MLC is located in a specific area as shown in Fig. 1a, it is exposed to the radiation field and creates scattered radiation; however, it is not considered in DEV; thus, it does not affect the Sc calculation. Only when the MLCs enter the DEV area (Fig. 1b), it can affect the Sc calculation. The MLC cannot be considered as present in region “a” of Fig. 1c (the region where the MLC-defined square field size is from 8×8 to 15×15 cm2 after the jaw-defined field size is fixed to 15×15 cm2); thus, the Sc value in the field where the scattered radiation from MLCs is not considered is calculated similarly, resulting in a difference in the measured Sc value. In the “b” region (the region where the MLC-defined square field size is 4×4 to 8×8 cm2 after the jaw-defined field size is fixed to 15×15 cm2), the position of the MLC affects the DEV; thus, the calculated Sc value decreases as the field size decreases. In terms of area “a,” it is a very small difference between the calculated and measured Sc values, but in the case of IMRT or VMAT, which use hundreds of segments and control points, the combined difference can be large. Previously, we have developed an additional model that can consider scattered radiation from the MLCs [10]. A model for considering scattered radiation from MLCs was located at the MLC location in the linac. The model was developed including line and area sources with scatter interface which was used for determining affected and unaffected areas. Details for scatter interface have been mentioned in the previous study [10]. This model has been verified using a 6 MV photon beam. The results showed that the model was more accurate than the existing model, and particularly, the accuracy increased for very small and irregular fields. For this developed model, the accuracy of the independent verification program could be improved, and a more accurate pretreatment quality management evaluation was enabled.

Fig. 1. Schematics of the geometrical relationship between the jaws and multi-leaf collimators (MLCs) in terms of the beam’s eye view, detector’s eye view, and scatter interface for (a) unaffected area, (b) affected area, and (c) head scatter factor (Sc) as a function of the MLC-defined square field size ranging from 4×4 to 15×15 cm2 at a fixed jaw setting of 15×15 cm2. The calculated Sc values are derived from the dual-source model.

Various Sc sets were measured for the development of the dual-source model (DSM) and the MLC scatter model. A 6 MV unflattened photon beam from a Varian Clinac® TrueBeam STx linear accelerator that is equipped with 60 pairs of millennium MLCs (Varian Medical Systems, Palo Alto, CA, USA) has been used. Measurements have been performed using a 0.125 cm3 cylindrical ionization chamber (Model 31010; PTW Freiburg, Freiburg, Germany) and a mini phantom (Model 670; CIRS Inc., Norfolk, VA, USA). The source-to-chamber distance was 100 cm, and the depth was 10 cm.

For the development of the DSM, the Sc of various jaw-defined square and rectangular fields has been measured. Here, all MLCs were in a retracted state. For the development of the MLC scatter model, the jaw was fixed, and then the Sc of various MLC-defined square fields was measured. The field setup for this measurement is illustrated in Table 1. To reduce the uncertainty in Sc measurement, the measurement was repeated at least 5 times, and the standard deviation was within 0.3%. The reference field was a jaw-defined size of 10×10 cm2.

In this study, the DSM parameters were iteratively optimized using the trust-region-reflective algorithm for nonlinear least squares (MathWorks, Inc., Natick, MA, USA) to match the calculated Sc with the measured one for the jaw-defined square and rectangular fields (Table 1). The objective function was the chi-square difference between the measured and calculated Sc values for the jaw-defined fields with the fully retracted MLCs. Optimization was performed within the maximum number of iterations (400) until the objective function reached below a termination tolerance (10−6) [10].

Similarly, the parameters were optimized using the same optimization methods as in DSM to attain the best fit between the measured and calculated Sc,MLC values.

To verify the MLC scatter source model, two Sc set measurement values of MLC-defined fields used in the existing modeling and calculated values have been compared. For further verification, the calculated values have also been compared to the Sc set measurement values that were not used in the existing modeling. This is a set of Sc values when an MLC-defined field is 4×4 to 15×15 cm2 in a state where the jaw is fixed at 15×15 cm2. The equation for evaluating the accuracy using percent error is as follows:

In this study, the DSM has been evaluated using jaw-defined square fields ranging from 4×4 to 40×40 cm2 and rectangular fields with one pair of jaws fixed at 4, 10, or 40 cm while the other pair varied from 4 to 40 cm. Fig. 2 shows the Sc values calculated by DSM and measured Sc values for the jaw-defined field size. Table 2 quantifies and shows the difference between the measured Sc value and the calculated Sc value for each measurement set. Overall, Sc calculated using the DSM and the measured Sc showed a good agreement. It can be identified that all difference values are within 0.212%. This suggests that the DSM has been properly optimized and modeled for the measured values. 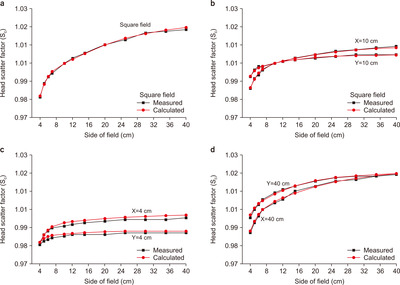 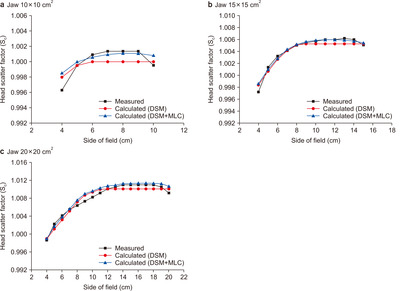 Fig. 3. Comparison between the measured and calculated head scatter factor (Sc) values for fixed jaw defined fields of (a) 10×10 cm2, (b) 15×15 cm2, and (c) 20×20 cm2. Sc is calculated based on the dual-source model (DSM) and DSM in conjunction with the multi-leaf collimator (MLC) scatter source (DSM+MLC).

Previous studies have developed sources that are capable of modeling scattered radiation from the MLCs for flattened photon beams and have evaluated their performance [10]. When only DSM was used, the jaw-defined field area showed a high accuracy with the measured value, but when the MLC-defined field was used, it showed a low accuracy. When considering the scattered radiation from the MLCs by adding the MLC scatter source model developed in the previous study, the accuracy was higher than the Sc calculated using the DSM. However, previous studies have considered only the flattened photon beam, while this study has evaluated the performance when an unflattened photon beam was applied to the same MLC scatter source model.

Since the unflattened photon beam does not pass through FF, the Sc value is relatively less than that of the flattened beam [12,13]. Other studies have also examined these characteristics. However, the characteristic or tendency of Sc depending on the field size or depending on X or Y is the same as in the flattened beam [12,13]. Therefore, the DSM and MLC models could also be applied to the unflattened beam. The optimization parameter values for the MLC model are smaller than the optimization parameters obtained in previous research, which indicates that the amount of scattered radiation decreased compared with the flattened beam, resulting in a decrease in the associated weight value.