Abstract
Purpose: This study aimed to evaluate the effect of collimator width on effective atomic number (EAN), relative electron density (RED), and stopping power ratio (SPR) measured by dual-layer dual-energy computed tomography (DL-DECT).
Methods: CIRS electron density calibration phantoms with two different arrangements of material plugs were scanned by DL-DECT with two different collimator widths. The first phantom included two dense bone plugs, while the second excluded dense bone plugs. The collimator widths selected were 64 mm×0.625 mm for wider collimators and 16 mm×0.625 mm for narrow collimators. The scanning parameters were 120 kVp, 0.33 second gantry rotation, 3 mm slice thickness, B reconstruction filter, and spectral level 4. An image analysis portal system provided by a computed tomography (CT) manufacturer was used to derive the EAN and RED of the phantoms from the combination of low energy and high energy CT images. The EAN and RED were compared between the images scanned using the two different collimation widths.
Results: The CT images with the wider collimation width generated more severe artifacts, particularly with high-density material (i.e., dense bone). RED and EAN for tissues (excluding lung and bones) with the wider collimation width showed significant relative differences compared to the theoretical value (4.5% for RED and 20.6% for EAN), while those with the narrow collimation width were closer to the theoretical value of each material (2.2% for EAN and 2.3% for RED). Scanning with narrow collimation width increased the accuracy of SPR estimation even with highdensity bone plugs in the phantom.
Conclusions: The effect of CT collimation width on EAN, RED, and SPR measured by DL-DECT was evaluated. In order to improve the accuracy of the measured EAN, RED, and SPR by DL-DECT, CT scanning should be performed using narrow collimation widths.
Keywords : Dual-layer dual-energy computed tomography, Collimation width, Cone-beam artifact, Effective atomic number, Relative electron density, Stopping power ratio

In clinical practice with most multi-detector CTs, a wide collimation width is preferred due to the faster scan time [6]. However, cone-beam artifacts are often observed with wide collimation widths and multiple rows of detectors [6,7]. This artifact can be severe with high-density materials such as dense bone and metal implants and this has crucial effects on dose calculation in radiation therapy planning.

A CIRS phantom with two different arrangements including eight different materials and a total of sixteen plugs was scanned with DL-DECT (IQon Spectral CT; Philips, Best, Netherlands). The material information including composition, physical density, RED, and EAN is shown in Table 1 [8,9]. As shown in Fig. 1, one of the two arrangements (Arr1) included dense bone plugs, while the other (Arr2) did not. For Arr2, two empty holes were left in place of the dense bone plugs and we did not evaluate those regions.

The collimator widths selected were 64 mm×0.625 mm for wider collimation and 16 mm×0.625 mm for narrow collimation. The other scanning parameters were 120 kVp for the tube voltage, 0.33 second gantry rotation, 3 mm slice thickness, B reconstruction filter, and spectral level 4. The pitch factor, tube current, exposure, and CTDIvol for the scanning of the phantoms with the different collimation widths are shown in Table 2.

2. Acquisition of EAN, RED, and SPR

The image analysis portal system, IntelliSpace Portal (Philips), provided by the CT manufacturer, was used to derive the EAN and RED of the phantoms from the combination of low energy (i.e., photoelectric image) and high energy (i.e., Compton image) CT images. The EAN and RED for each phantom and collimation width were analyzed for the defined region of interests (ROIs), which were 2.4 cm in diameter and 9 mm high (for three consecutive image slices). The SPR for each ROI was calculated with equation (1) using the measured EAN and RED. The derived SPR values for each material were then compared with the theoretical SPRs which were calculated using the same equation.


The EAN, RED, and SPR for each phantom and collimation width were then compared between the images with the wider and narrower collimation widths. The SPR were described by the difference between each theoretical and calculated SPR using the measured EAN and RED. 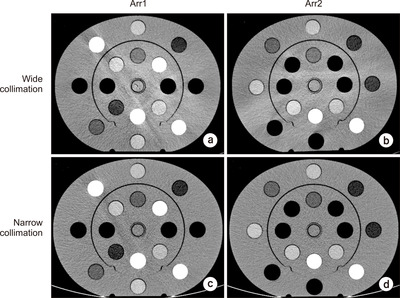 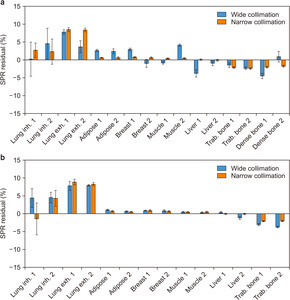 We evaluated the negative impact of cone-beam artifacts on the estimation of RED, EAN, and SPR measured by DL-DECT by varying the collimation width of CT scans. Severe artifacts in the images acquired with wide collimation widths were observed and these affected the HUs in both low energy (photoelectric) and high energy (Compton) CT images. Since the RED and EAN were derived by the relation between the low energy CT images and high energy CT images [3,4,5], variation in HUs reduced the accuracy of estimation of RED, EAN, and SPR. Inaccurate SPR can result in a critical range uncertainty error [10,11]. The proton range uncertainty from the conventional HU conversion method (i.e., stoichiometric conversion) has been reported to be up to 1.8% for bone and 1.1% for soft tissues, corresponding to 1.3 mm. [12]. Wohlfahrt et al. [11] have demonstrated that CT-related uncertainties can be reduced using DECT instead of SECT, resulting in decreased dependence of SPR prediction on beam hardening. For the fast scanning of patients in clinical practice, wide collimation widths are commonly used. However, for radiation therapy treatment planning purposes, cone-beam artifacts can cause severe dose calculation errors in proton and heavy ion radiotherapy. Cone-beam artifacts can be reduced using narrow collimation widths or slower pitch factors. Furthermore, since cone-beam artifacts are more prominent in the periphery of the field of view (FOV), it is important to align the center of the imaging volume with the center of the FOV [6].