Abstract
This study aimed to determine the optimal thickness of the active layer and scan mode for a flexible radiochromic film (F-RCF) based on the active lithium salt of pentacosa-10,12-diynoic acid (LiPCDA). F-RCFs of 90, 120, 140, and 170-μm thickness were fabricated using LiPCDA. Several pieces of the F-RCFs were exposed to doses ranging from 0 to 3 Gy. Transmission and reflection modes were used to scan the irradiated F-RCFs. Their dose-response curves were obtained using a second-order polynomial equation. Their sensitivity was evaluated for both scanning modes, and the uniformity of the batch was also examined. For both the transmission and reflection modes, the sensitivity increased as the film thickness increased. For the reflection mode, the dose response increased dramatically under 1 Gy. The value of the net optical density varied rapidly as the thickness of the film increased. However, the dose-response curves showed a supralinear-curve relationship at doses greater than 2 Gy. The sensitivity of the reflection scan at doses greater than 2 Gy was higher than that of the reflection scan within 0–2 Gy. The sensitivity steadily decreased with increasing doses, and the sensitivity of the two modes was within 0.1 to 0.2 at 2 Gy and was saturated beyond that. For the transmission scan, the sensitivity was approximately 0.2 at 3 Gy. For the intra-batch test result, the maximum net optical density difference of the intra-batch was 5.5% at 2 Gy and 7.4% at 0.2 Gy in the transmission and reflection scans, respectively. In the low-dose range, film thickness of more than 120-μm was proper in the transmission mode. In contrast, the transmission mode showed a better result compared to the reflection mode. Therefore, the proper scan mode should be selected according to the dose range.
Keywords : Radiochromic film, LiPCDA, Reflection, Transmission, Dosimetry

Radiochromic films (RCFs) have been introduced for two-dimensional (2D) measurement in the field of radiation therapy [1,2], providing advantageous features such as a near water-equivalent material, high spatial resolution, and energy independence in the therapeutic energy range (i.e., megavoltage range) [3].

The principle of RCF dosimetry lies in measuring the color change of film, which, when irradiated, becomes dark due to the polymerization of diacetylene molecules. The variation in light intensity is measured by a scanner or densitometer [4], and the intensity is calibrated using the optical density (OD) [5]. The RCF for our study consists of an active layer and two matte-polyester substrates. The polyester laminates the side of the active layer for protection. However, attaching the film to a curved body for in vivo dosimetry is difficult because of the polyester’s rigidity [6].

Moreover, the sensitivity of the film depends on the amount of diacetylene molecules [7]. The active lithium salt of pentacosa-10,12-diynoic acid (LiPCDA) interacts with radiation, forming a free radial through polymerization. For EBT3, the darkness of the film is difficult to observe in the low-dose range owing to its thin active layer (28 µm) [8]. If the amount of diacetylene molecules increases, the scale of the color change increases for the same dose [9]. In other words, the sensitivity also increases as the film thickness increases.

Commercially available RCFs were supplied exclusively by a single company (Ashland, Bridgewater, NJ, USA). The active layer consists of gelatin, LiPCDA, and a 0.5% aqueous solution of tartrazine. The compositions of the active layer and LiPCDA are listed in Table 1 and 2, respectively.

Composition of the active layer

Each set of the 3 film dosimeters was sampled from the same batch with the same film thickness. The size of each film was 3×3 cm2. Dosimetric leaves of 0.2, 0.5, 1, 2, and 3 Gy in the therapeutic dose range were exposed to the set of films. A 6-MV photon beam was generated using a Trilogy radiation therapy system (Varian Medical Systems, Houten, The Netherlands). The film set was placed at a depth of 10 cm in a solid water phantom with reference conditions (i.e., 100 cm source-to-surface distance, 10×10 cm2 field size). The machine was calibrated according to the American Association of Physicists in Medicine Task Group 51 protocol. The monitoring unit was set to irradiate a predetermined dose. Before irradiation, all films were scanned in the transmission and reflection mode using an Epson Expression 11000XL document scanner (Epson Seiko Corporation, Nagano, Japan) for an unexposed measurement [10]. The scanned images were saved in a tag image file format (TIFF) with 48-bit color and a spatial resolution of 300 dpi. The images were denoised using a median filter with a pixel size of 5×5.

After irradiation, the films were kept in a black envelope for self-development for 24 hours. Film scanning was performed to measure the exposure in a similar manner as with the unexposed measurement. The black surface was scanned for the background measurement in the reflection mode.

The scanned images were analyzed using RIT113 Classic software version 6.71 (Radiological Imaging Technology, Inc., Colorado Springs, CO, USA). The RGB channels were extracted from the TIFF image. The red channel was used only to calculate the netOD for the measurement value [12].

For the film calibration, the netOD was calculated as follows [7]:

Lastly, the intra-batch difference was examined to determine the film’s uniformity. Three pieces of film were randomly obtained in one batch. The films were scanned to evaluate the netOD following the necessary protocol.

Fig. 1. Calibration curve for various thicknesses of the flexible radiochromic film within the range of 0–3 Gy in the transmission mode (a) and reflection mode (b). netOD, net optical density.

In the case of the reflection mode, the dose response increased dramatically in the low-dose range (<1 Gy), except for the films with thicknesses of 80 and 90 µm. The value of the netOD varied rapidly as the film’s thickness increased. However, the Hurter and Driffield curve showed a supralinear-curve relationship at doses greater than 2 Gy.

Fig. 2. Sensitivity as a function of the dose in the transmission mode (a) and reflection mode (b). 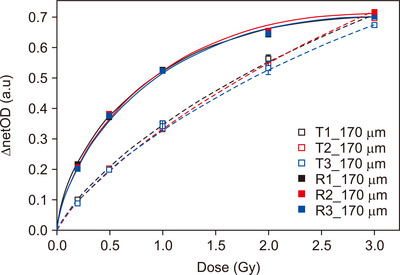 In this study, we manufactured an LiPCDA-based film evaluated its dosimetric characteristics. The film’s sensitivity increased as the thickness of the active layer increased in response to an increase in the number of diacetylene molecules. Even when the film was irradiated with the same dose, the polymerization reaction was much higher for the thicker films. Moreover, the light is more attenuated because the transmission length of the thick film is long. In conclusion, the intensity of the transmitted light is lower. However, the flexibility of the film decreased with increasing film thickness. Moreover, the cost of production is also higher owing to rising material costs. To evaluate film thickness, a far more accurate measuring instrument is needed. Viable alternatives include a ultrasonic water depth gauge.

The film thickness was the dominant factor for determining film sensitivity. In this study, we used micro-vernier calipers to measure the thickness. However, the accuracy and reproducibility of the device depends on operator skill.

The intra-batch variation was checked for uniformity and was slightly higher than that of the commercial RCF. Film uniformity is an important quality factor, and therefore the manufacturing process needs to be improved to ensure uniformity.

This work was in part supported by Radiation Technology R&D program through the National Research Foundation of Korea funded by the KoreanKorea government (MIST) (2019M2A2B4095126) and by the National Research Foundation of Korea (NRF) and Korean Association for Radiation Application (KARA) as a part of the Radiation Technology Commercialization Project of the Korean Ministry of Science and ICT (NRF-2019M2D3A2060217, Technology Transfer and Commercialization in the Radiation fields).