Abstract
Purpose: In this study, we investigated the relationship between the noise characteristics and the number of projected images in tomosynthesis using a digital phantom.
Methods: The digital phantom consisted of a columnar phantom in the center of the image and a spherical phantom with a diameter of 80 pixels. A virtual scan was performed, and 128 projected images (Tomo_w/o) of the phantoms were obtained. The image noise according to the Poisson distribution was added to the projected images (Tomo_×1). Furthermore, another projected image with additional noise was prepared (Tomo_×1/2). For each dataset, we created datasets with 64 (half) and 32 (quarter) projections by removing the even-numbered images twice from the 128 (fully) projected images. Tomosynthesis images were reconstructed by filtered back projection (FBP). The modulation transfer function (MTF) was estimated using the sphere method, and the noise power spectrum (NPS) was estimated using the two-dimensional Fourier transform method.
Results: The MTFs did not change between datasets, and the NPSs improved as the number of projected images increased. The noise characteristics of the Tomo_×1_half images were the same as those of the Tomo_×1/2_full.
Conclusions: To achieve a reduction in the patient dose in tomosynthesis acquisition, we recommend reducing the number of projected images rather than reducing the dose per projection.
Keywords : Tomosynthesis, Noise power spectrum, Modulation transfer function, Number of projections, Poisson distribution

Digital tomosynthesis is a technique used to acquire three-dimensional images using a general radiography system [1]. Many reports describe the clinical utility of the technique, and it is widely used in many fields [2–5]. The evaluation of tomosynthesis image quality has attracted considerable attention. For example, the modulation transfer function (MTF), noise power spectrum (NPS), section thickness, and focal magnification have been evaluated [6-9]. Breast tomosynthesis has become an indispensable technique in mammography, and there are published guidelines for the quality control of the equipment used [10]. Tomosynthesis images are obtained by reconstructing multiple projected images taken from different angles using techniques such as filtered back projection (FBP). In this process, several parameters related to image acquisition and reconstruction affect the tomosynthesis imagery. The obtained number of projected images also affects the tomosynthesis image quality. The noise in the projected images is integrated during reconstruction; therefore, its propagation should be analyzed in particular. However, no prior studies have examined this issue in detail. In this study, the relationship between the number of projected images and the image noise was evaluated by simulation with a digital phantom.

In this study, we prepared a three-dimensional digital phantom for the simulation (Fig. 1). This phantom was created in Microsoft Visual Studio Code (Microsoft Corp., Redmond, WA, USA) using Rust (a programming language). The image size was 1,024×1,024×1,024 pixels, the virtual pixel size was 0.1 mm, the background pixel value was 0, and the bit depth was 16 bits. An 800×800×100-pixel digital phantom with a pixel value of 6,000 (approximately 10% of the maximum pixel value) was placed at the center of the image. A spherical digital phantom with a diameter of 80 pixels and a pixel value set to 30,000 (approximately 50% of the maximum pixel value) was placed in the phantom to evaluate resolution characteristics. The spherical phantom lacked position dependency and could be placed anywhere; it was, therefore, placed in a corner to maximize the collection of the NPS data. 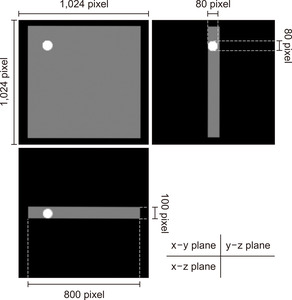 Fig. 1. Schematic of the digital phantom. The pixel values of the columnar and spherical phantoms are 6,000 and 30,000, respectively.

As shown in Fig. 2, the digital phantom was transformed into a projected image using virtual alignment. The coordinates of the X-ray tube focal point () are as shown in Eq. 1: 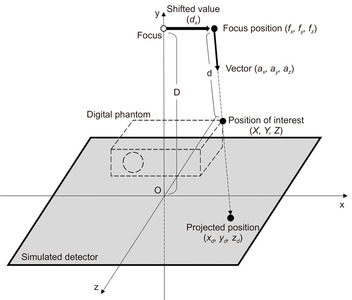 Fig. 2. Schematic of the alignment used for acquiring the projected and tomosynthesis images.


The desired coordinates (X, Y, Z) can be calculated using the following equations:


Using these equations, the projected image of the digital phantom was obtained by changing the variable t with the number of projections (Fig. 3). In the virtual alignment, D and the focal spot traveling distance were set to 250 and 500 pixels, respectively. As a result, the simulated angular range of the X-ray tube was ±45°, and we set the value of t to be in the range 1 to 128. We thereby obtained a digital phantom with 128 projected images with the same angular interval. The equipment with the height acquisition (e.g., Safire X-TV equipment; Shimadzu Co., Ltd., Kyoto, Japan) could collect 74 images; however, there may be equipment with a higher acquisition. Therefore, we set the maximum number of images to be collected to 128.

Fig. 3. Angular projected images acquired when the simulated X-ray tube was positioned at ±45° and the center.

3. Reconstruction of the tomosynthesis image

In general, a low-pass filter is applied to tomosynthesis images to reduce artifacts in the direction of the X-ray tube movement. Therefore, in this study, a Fourier transform method and low-pass filter were applied before the back projection.

The back projection is also explained in Fig. 2. The coordinates (X, Y, Z) on the back-projected image are located on a straight line that passes through the position of the X-ray tube focus () at a certain time, s, and the coordinates () are projected onto the virtual detector. The unit vector of this line is given as follows:


where d is given by the following equation:


In addition, because the following relationship holds:


the coordinates () on the virtual detector are defined using = 0:

Note that the vector () is not dimensionless but has the dimensions of distance per unit time. Using the variable s, xd, and zd are given as follows:

Tomosynthesis reconstruction was performed on the noise-added datasets (Tomo_×1 and ×1/2) and the noise-free dataset (Tomo_w/o). The number of projected images used for the reconstruction varied for each dataset. A total of 128 projected images were generated (full projection [proj.]; Tomo_w/o full proj., _×1 full proj., and _×1/2 full proj.). We also produced a dataset that contained 64 images and excluded the even-numbered images from the full projection dataset (half projection; Tomo_w/o half proj., _×1 half proj., and _×1/2 half proj.). Finally, a 32-image dataset was created by removing the even-numbered images from the half projection dataset (quarter projection; Tomo_w/o quarter proj., _×1 quarter proj., and _×1/2 quarter proj.). Tomosynthesis reconstruction was performed for each of these datasets (Fig. 4), meaning that a total of nine datasets were used for the analysis.

To evaluate the effect of the added image noise and the change in the number of projected images on the resolution characteristics, the MTF was calculated using the spherical phantom (sphere method) [13]. The one-direction MTF was estimated using only the spherical phantom because the estimation of this in the X-ray tube travel direction is difficult owing to the existence of undershoot-like artifacts. We set up a 128×20-pixel region of interest (ROI), as shown in Fig. 5a, and obtained a profile of the pixel values. The line spread function (LSF) was obtained by differentiating this profile. In addition, the LSF was normalized using the peak value, and its base was subjected to the zeroing procedure. However, we did not perform linearization. The MTF was obtained using a one-dimensional discrete Fourier transform method of the LSF. 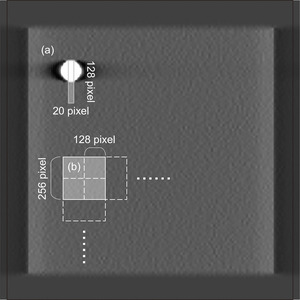 In each case, was taken as the tomosynthesis image corresponding to the middle height of the digital phantom. A 256×256-pixel ROI was extracted from the digital phantom using ImageJ (ver. 1.53; National Institutes of Health, Bethesda, MD, USA) (Fig. 5b). Detrending was performed based on a two-dimensional polynomial fit. The NPS was estimated using the two-dimensional Fourier transform method described in a previous report [14]. In addition, we set up a new ROI that overlapped the aforementioned ROI by 128 pixels and calculated the NPS in the same way. Finally, the NPS was calculated using 20 ROIs, and the average value of the NPS was used as the NPS of the dataset. 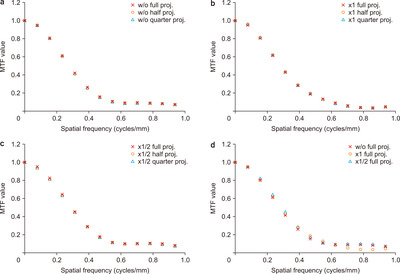 Fig. 7. Noise power spectrum (NPS) of the Tomo_w/o datasets in the (a) vertical and (b) horizontal directions. proj., projection. 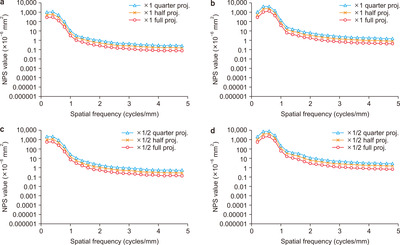 Fig. 9. Noise power spectrum (NPS) of the full and half projection of the Tomo_×1 and _×1/2 datasets in the (a) vertical and (b) horizontal directions. proj., projection.

Fig. 10. Relationship between the number of projected images and the noise power spectrum (NPS) value at 2.0 cycles/mm.

In many reports, real images obtained from tomosynthesis imaging equipment have been used for the evaluation of tomosynthesis image quality [15-17]. The use of real images is beneficial because the analysis can be directly related to the clinical equipment. However, if only specific properties are to be studied, using a digital phantom is more convenient. The advantages of the digital phantom used in this study were as follows: it was completely noise-free, an accurate spherical phantom could be prepared, and an arbitrary number of projected images could be used for reconstruction. For MTF measurement, the European Reference Organization for Quality Assured Breast Screening and Diagnostic Services (EUREF) guidelines recommend a method using a thin metal wire (wire method) [10]. However, the wire method requires a larger exposure dose and as little image noise as possible in the direct X-ray region. In our study, the wire method was not suitable because the MTF was measured with added image noise. Therefore, we used a spherical phantom to measure the MTF. The MTF values did not change for the datasets without (Tomo_w/o) and with (Tomo_×1 and ×1/2) image noise, except for the slight difference in the MTF value at 0.8 cycles/mm. We think that these differences in the MTF value were caused by the zeroing procedure. Therefore, it was confirmed that the resolution characteristics were not degraded by the increase in image noise.

All relevant data are within the paper.