Accurate delivery of radiotherapy is affected by different geometrical uncertainties, such as inter-fraction variation, intra-fractional motion, changes to the target volume, and patient setup errors [1-3]. To improve the treatment outcome, particularly when combined with highly conformal delivery techniques, such as intensity-modulated radiation therapy and volumetric-modulated arc therapy, which are often accompanied by steep dose gradient, different technologies have been developed to obtain the patient’s image daily and/or during treatment. [4-6].

Various image guidance technologies to improve patient positioning have been suggested by researchers, including kilo-voltage (kV) X-ray imaging, in-room computed tomography (CT), kV, and mega voltage (MV) cone-beam CT (CBCT) [7-9]. These techniques enables the ability to visualize the patient anatomy directly with submillimeter accuracy and match the patient’s initial planned position. However, imaging methods based on ionizing radiation deliver additional doses to the patient, and the imaging dose is not currently accounted for in treatment planning [9]. Other image guidance techniques, including infrared, optical, and radiofrequency based technologies that do not use ionizing radiation have also been proposed to monitor patient setup and intra-motion [10-12]. These techniques provide patient setup position, real-time motion monitoring, and surrogate respiratory signal without additional imaging dose [11,13]. However, patient surface or marker should be visible to monitor the patient’s position, and gantry, imaging arms can block the camera’s view.

The pressure mapping technique is widely used in different fields such as health care, industrial, and robotics [14]. It provides quantitative information on human posture and movement, such as balance and foot-ground interaction, which is a fundamental aspect for evaluating the quality of life in health care [15]. Among the different pressure sensors, force sensing resistor (FSR) sensor comprised of conductive particles in the polymer matrix has better impact resistance and durability. Also, it can be produced in different ranges of size, shape, and arrangement. The FSR sensor has a very thin and light film structure with excellent repeatability and accuracy [14,15]. Shieh et al. [16] developed an oropharyngeal swallowing monitoring system that can be wearable and portable using an FSR sensor. Cho et al. [17] reported the immobilization-device quality assurance system, which could measure the force between a patient and the thermoplastic mask quantitatively using an FSR sensor. Additionally, a patient alignment method that measures the pressure distribution between patient’ back and treatment table was proposed to enhance patient setup accuracy [18]. However, the characteristic evaluation of signal perturbation, incident beam attenuation, and position accuracy tests of the measured pressure distribution during the MV photon beam delivery has not yet been performed. Therefore, performs the characteristic evaluation of pressure mapping systems for patient position verification in radiation therapy.

The pressure mapping system includes MS 9802 FSR sensor (Kitronyx Inc, Seoul, Korea), which has 2,304 force sensing nodes using 48 columns and 48 rows, Baikal force controller (Kitronyx Inc), and control PC (personal computer), as indicated in Fig. 1. The sensing area of the FSR sensor is 454×693 mm2, and thickness is 0.62 mm. The change in internal resistance corresponding to the applied mechanical stress is converted into electronical signal using the FSR sensor. The electronical signal is transformed into the digital signal by a controller with a USB interface acting as a series port, enabling it to be controlled by the control PC. It can measure the maximum pressure up to 4 kg/cm2, and the available temperature range is −20 to 60 degrees. The sampling rate of the pressure mapping system was up to 32 Hz. The transmitted signal can be displayed in real-time using the software and quantitative analysis, such as three-dimensional (3D) pressure distribution, the center of pressure (COP), maximum relative pressure value (mRPV), average relative pressure value (aRPV), and the area is possible. COP location is identified from the voltage signals received from the sensing nodes. The pressure distribution varies along the sensing nodes and time. With the finite sensing nodes lateral direction limits (a, b) and longitudinal direction limits (c, d), the real-time centroid of the distributed dynamic pressure, p(x, y, t), along the lateral (x) or longitudinal (y) directions is given as the following equation (1) and (2):

These definitions of the COPlat(t) and COPlng(t) provide the total pressure at time t and the ratio relative to the pressure center location along with a continuously distributed sensor [19].

2. Characteristic evaluation in the radiation field

Both the radiation beam attenuation caused by pressure mapping sensor and signal perturbation by MV photon beam was evaluated. 6 MV and 10 MV photon beams were delivered using VitalBEAM (Varian Medical Systems, Palo Alto, CA, USA) at the reference setup with the source to surface distance (SSD; 100 cm, field size 10×10 cm2) with gantry 0°. Attenuation was defined as the ratio of the radiation dose with/without the device. Integrated coulomb measurement at a depth of the maximum dose (Dmax) was performed using a Farmer type chamber (TN 30013; PTW, Freiburg, Germany) and an electrometer (Unidose E, PTW) in a solid water phantom. 100 MU (monitor unit) and 500 MU were delivered twice to reduce inter-measurement variation. Signal perturbation was evaluated using extended SSD 400 cm, 15 MV photon beam with 40×40 cm2 and 3,000 MU. The measurement in the extended SSD was performed to consider the total body irradiation (TBI), which delivers the beam with a low dose rate (<10 cGy/min). The mRPV, aRPV, COP, and area were obtained with/without radiation using the upper body of an anthropomorphic phantom (Model 702 Adult ATOM Female; CIRS Inc., Norfolk, VA, USA) for 30 minutes, as indicated in Fig. 2. Additionally, COP was measured at 10 minutes intervals to confirm the position change due to signal fluctuation by radiation. 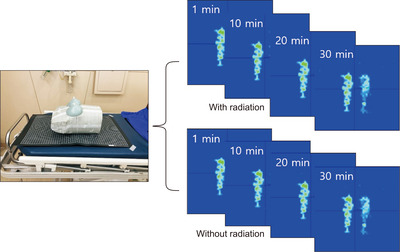 To evaluate the accuracy of the COP measured using a pressure mapping sensor, it was compared with CBCT, which is integrated into a linear accelerator and capable of acquiring 3D volumetric image. The multi-imaging modality iso-centricity (MIMI) phantom (Standard Imaging, Middleton, WI, USA) obtained by the Brilliance CT Big BoreTM (Philips, Amsterdam, Netherlands) was used as a reference image to match the CBCT image. The MIMI phantom was placed on the treatment couch, and aligning the phantom was performed at a known offset (lateral: 1.2 cm, longitudinal: 1.0 cm) position using the external lasers. Here, the COP value was obtained by placing the pressure mapping sensor between the treatment couch and the MIMI phantom. After obtaining the CBCT image of the MIMI phantom with the known offset, the offset vectors were calculated through registration with the reference image. To compare the vector values and COP value obtained using the offset, the image without the offset was obtained to calculate the vectors and COP values.

The characteristics of the pressure mapping system were evaluated in the situation where MV photon beam is delivered to confirm whether it is possible or not to apply patient motion management during treatment. Before applying clinical implementation, it should be confirmed that there is no effect such as signal fluctuation and attenuation by the incident beam.

There are different types of pressure mapping sensors, such as piezo-resistive, capacitance, and piezoelectricity, and the FSR sensor used in this study piezo-resistive study, can be used with relatively simpler electronics at high-speed, is very thin. The attenuation of the incident beam differs depending on the thickness and components of the sensor, and the signal measured using the sensor could be altered by radiation. If the sensor is affected by radiation, the sensor is unsuitable for patient motion monitoring for radiation therapy. Therefore, to monitor the patient’s motion during treatment, the characteristic evaluation for the MV photon beam should be conducted.

As indicated in Table 1, the difference in the measured charge with and without the FSR sensor at 6 MV was 0.1% and 0.06% at 100 MU and 500 MU, respectively, and it was 0.05% at 100 MU and 0.1% at 500 MU in 10 MV photon beam. It was confirmed that the difference in attenuation caused by the FSR sensor for both energies was small. Seppälä and Kulmala [20] reported that the attenuation caused by the carbon fiber couch was about 3.6% at 6 MV and about 2.4% at 15 MV; it should be appropriately reflected in the treatment plan due to the increase in skin dose. However, in the case of the sensor used in this study, the increase in skin dose is expected to be insignificant because there is little attenuation effect.

Table 2 indicates the mRPV, aRPV, and area of pressure distribution with and without radiation for 30 minutes in a 15 MV beam. The difference in mRPV, aRPV, area of pressure distribution with/without radiation is about 0.6%, 1.2%, and 0.5%, respectively. The COP values were also confirmed that there was little difference between when the radiation was delivered or not, as indicated in Table 3. There is little radiation effect on the pressure distribution of the anthropomorphic phantom measured at 10 minutes intervals. In the case of external beam radiation therapy, including stereotactic body radiation therapy, the beam delivery time is less than ten minutes, but if treatment was conducted, such as TBI with a low dose rate for a long time, it takes more than 30 minutes. Therefore, the effect of radiation during 30 minutes in TBI condition needs to be confirmed, and the results show that there is no significant difference.

mRPV, aRPV, and area of pressure distribution without and with radiation for 30 minutes in 15 MV beam

Center of pressure variation for 30 minutes without and with radiation

Table 4 indicates the results of the positioning accuracy compared with CBCT. There is a difference between 1.2 mm and 1.1 mm for lateral and longitudinal directions between CBCT and pressure mapping system, respectively. The node spacing of the FSR sensor is 0.95 mm and 1.45 mm for lateral and longitudinal direction, making it challenging to ensure the accuracy of the sub millimeters exhibited in X-ray or surface-based monitoring systems. However, the pressure distribution can acquire real-time information caused by a patient’s lying position, which cannot be obtained from a surface-guided or X-ray based monitoring system. Although it was confirmed that the self-correction method using patient’s backpressure distribution helps improve the patient’s setup, different effects using MV photon beam were not evaluated [18].

Patient motion monitoring using pressure distribution is a novel application that has not been widely used in radiation therapy and can acquire information such as lying position, patient’s weight, which cannot be verified in existing devices. However, these systems should be evaluated for features in the environment where treatment is performed before clinical use, and it was confirmed that the signal perturbation by radiation and attenuation measured using the pressure mapping system was small. Our results confirmed the possibility of acquiring the pressure distribution during radiation therapy, and in the future, motion monitoring will be conducted through volunteer and patient case studies to evaluate the possibility of clinical implementation.

In this study, the characteristics of a pressure mapping technique during treatment were evaluated in terms of attenuation and signal perturbation using radiation. The pressure distribution measured using the FSR sensor with a thickness of 0.6 mm was confirmed to have little attenuation and signal perturbation by the MV photon beam. The pressure distribution would be suitable for patient motion management methods during radiation therapy because it can monitor real-time movement and information for the lying position, which is hard to obtain in the existing system. Based on these results, clinical implementation by applying pressure the mapping technique to volunteers and patients will be further conducted.